The fruit and veg cooperative Granada La Palma, the largest producer and marketer of cherry tomatoes and specialty tomatoes in the world, incorporated an automated warehouse in its production centre of Carchuna (Granada) for field fresh products, and another with Movirack on mobile bases for consumables and packaging. These two solutions provide sufficient capacity, and address the large growth anticipated with cutting-edge equipment that increases productivity by maintaining the recognised quality of their products. 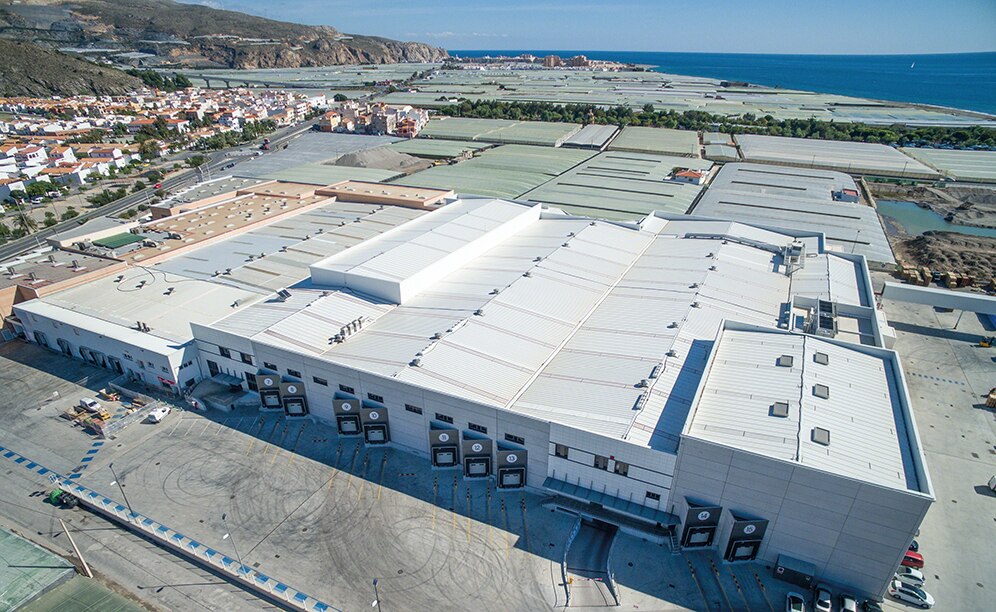 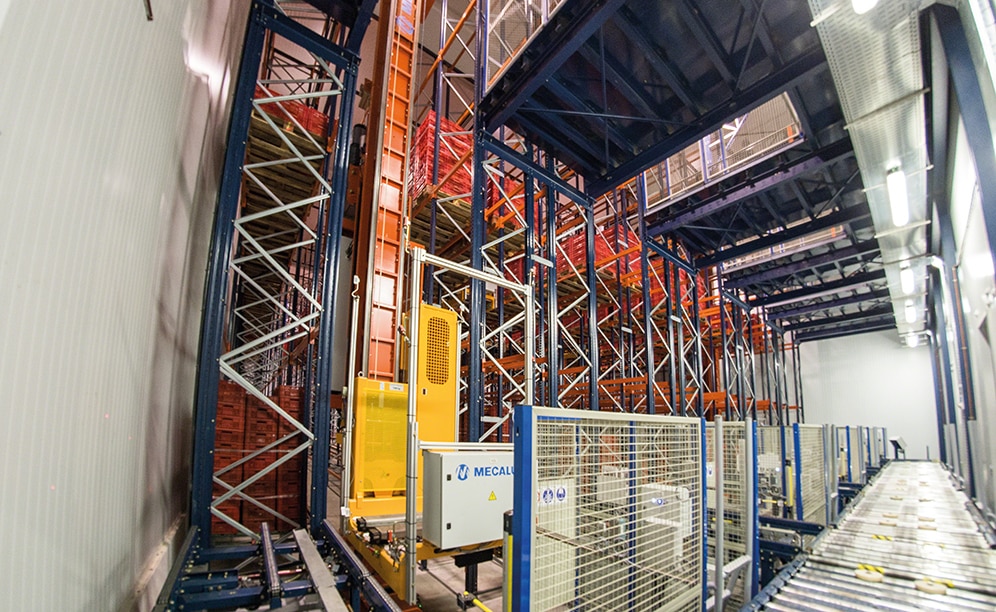 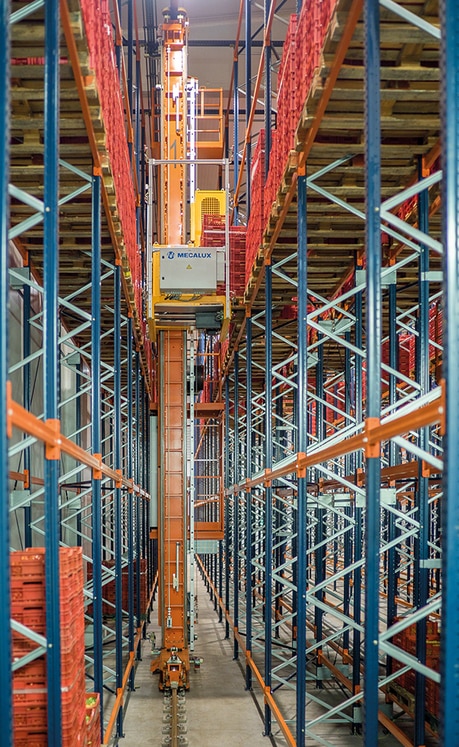 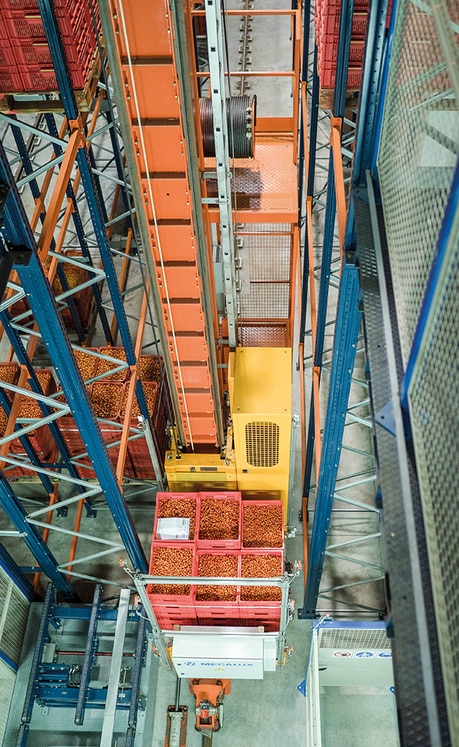 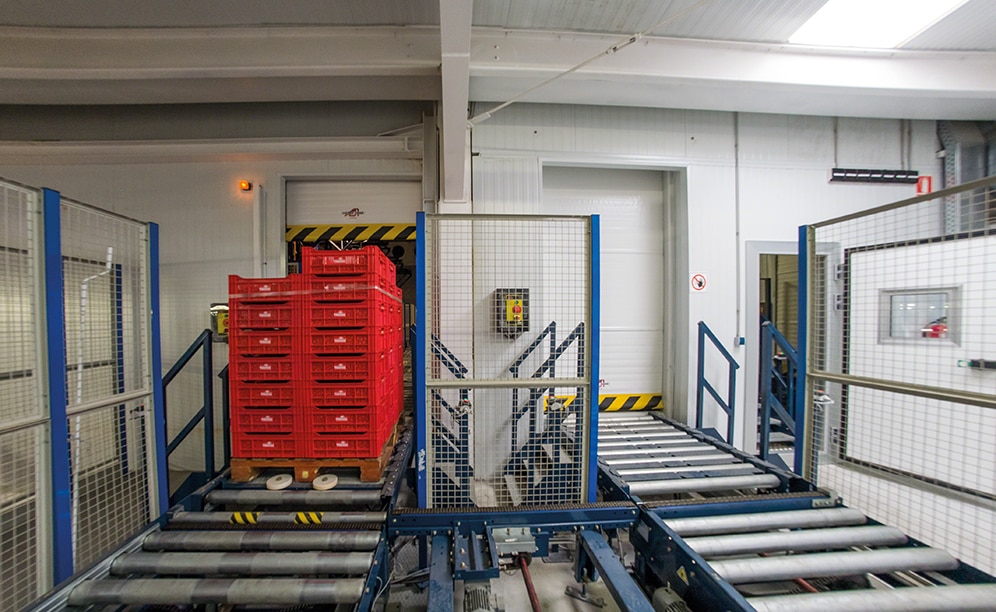 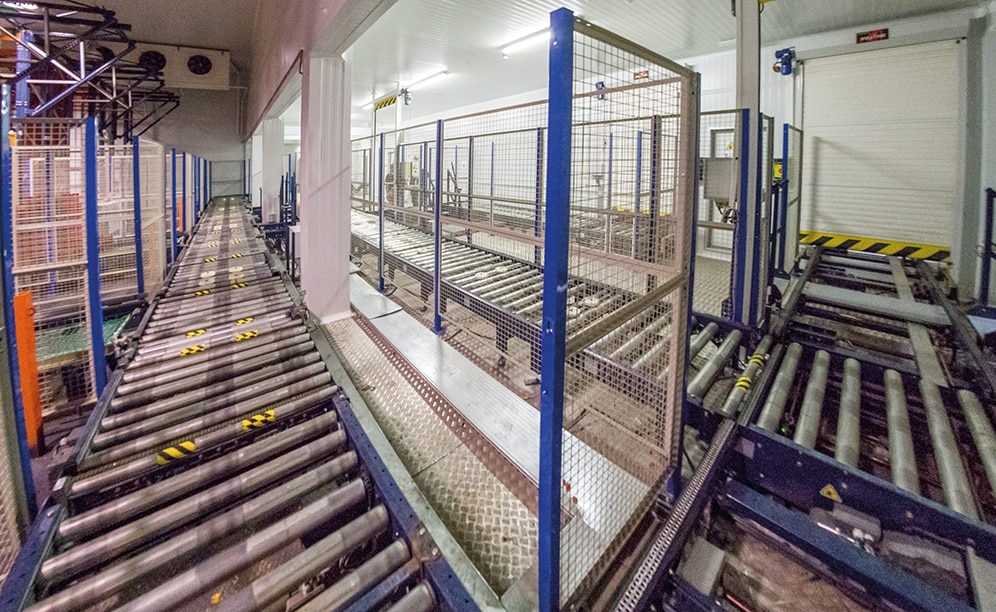 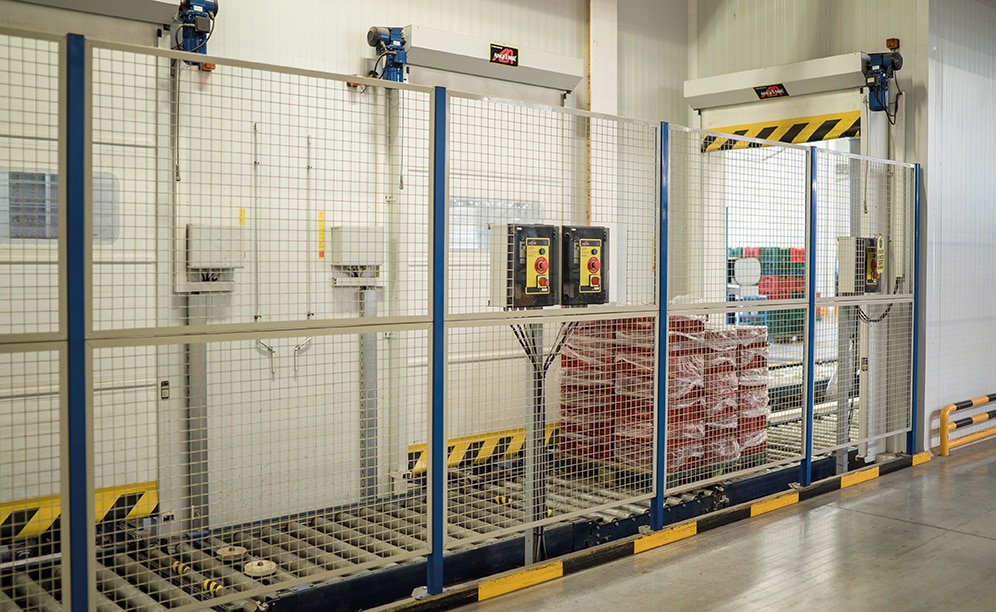 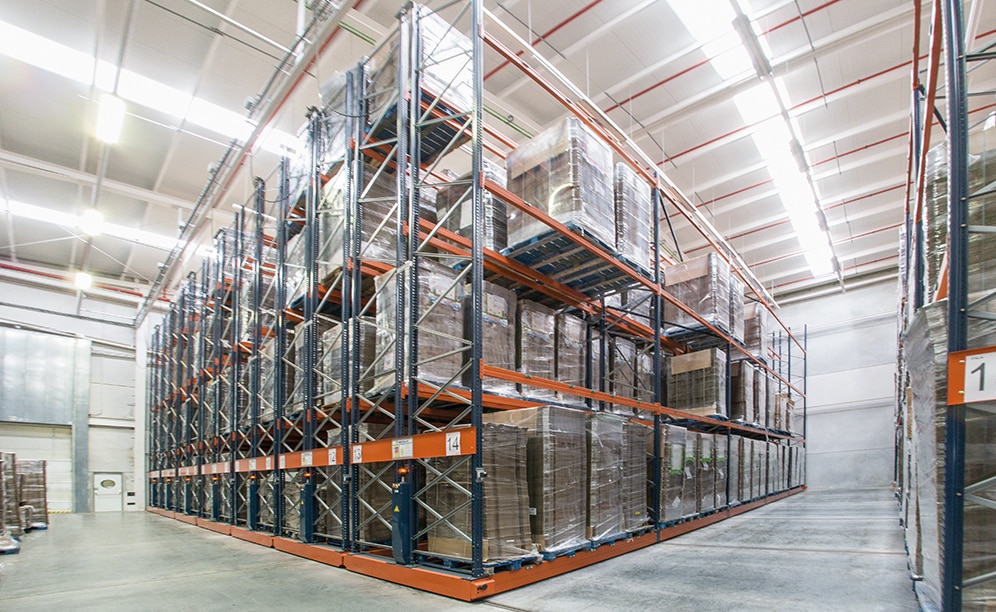 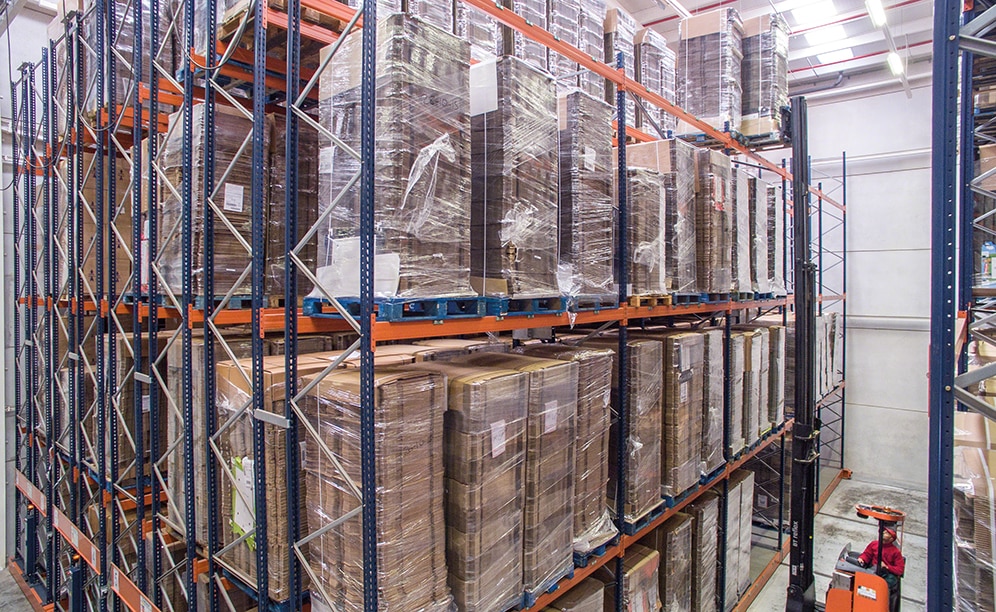 Granada La Palma was founded in 1973 and is currently the 10th largest producer-exporter of fruits and vegetables from Spain. They focus on cherry tomatoes, cucumbers and other specialty tomatoes. Their main market is in the European Union, in countries such as the United Kingdom, France, Germany and Spain. Production has increased significantly in recent years, exceeding 75,000 t, therefore, the company needed to expand its plant in the town of Carchuna (Granada). They asked for Mecalux’s collaboration with the decision to undertake this ambitious 20,000 m2 expansion project.

The Granada La Palma plant is located in the middle of farm fields. Mecalux built two integrated warehouses strategically within the same centre: the refrigerated automated warehouse set aside for fresh products coming from the fields, and another for consumables and packaging with Moviracks.

The organisation of the Granada La Palma production centre:

Refrigerated automated warehouse
The automated warehouse is considered the heart of the plant: the goods flow continuously from the farm fields and pass through various production stages, the most important being calibration and final packaging. They are then sent to multiple destinations, maintaining their traceability throughout the process.

Entry of goods
Goods from the fields, or external inputs, accumulate in crates that have been stacked on pallets beforehand. Reception is at the back of the complex, in the warehouse front of the warehouse.

Operators, aided by electrical pallet trucks, place the pallets in the input stations. Then, they go to the checkpoint, where their characteristics are verified and examined to see that they meet the established warehouse parameters and requirements.

Once this phase is completed, three lifts move the pallets to the top floor. Flow capacity is sufficient to absorb the large number of deliveries that farmers deposit in a relatively short period of time.

The entry of semi-processed goods from the production areas, which must be stored once again, is also located on the lower level. Access to the upper floor is via the lift located in the same area.

On the top floor, there is a vast accumulation area set up for pallets arriving from the lifts. There are also the entry conveyors for the aisles and a verification zone.

The elevated position of inputs was designed so that there is no interference with output operations. Moreover, a wide circulation passageway is made possible on the lower floor, which joins the old and new production plants.

Composition of the warehouse
The warehouse is a traditionally constructed, refrigerated cold storage, which is temperature controlled for the optimum conservation of the company’s products. It is 47 m long by 20.5 m wide and 11.1 m high, with a total capacity of 1,560 pallets of 1,000 x 1,200 mm with a unit weight of 1,150 kg each.

To calculate the racking structure and its clearances that the cold storage is equipped with, the European standards, namely the EN 15512 and EN 15620 norms related to storage in metal racking, are taken into account.

The refrigerated cold storage is composed of five, single-depth aisles. Each is served by a single-mast stacker crane with a cabin on board that rises with the load, which favours handling. These machines move the pallets between the conveyor stations and the corresponding locations in the racks, and vice versa.

Outputs of goods
The loading docks are located in the front of the new production plant.

In this area checkpoints were installed, as well as distribution forwarded to the different production areas and even part of pre-packaged products that have been temporarily sent to the warehouse.

Safety at the plant
For the purposes of protecting people and goods from possible incidents, all areas where elements are in motion (conveyors, lifts and stacker cranes) were sealed off using metal enclosures, fast-acting vertical roll-up doors, safety devices with laser beams or horizontal grids.

Easy WMS by Mecalux
The production centre is governed by the Easy WMS warehouse management system by Mecalux, which is responsible for ensuring the traceability of products and organising all the operations performed, including some of the following functions:

The Easy WMS developed by Mecalux is in permanent and bidirectional communication with the FRUTTEC ERP of Granada La Palma. Both systems exchange orders and the information that is essential for optimal warehouse management. In this way, the company attains absolute and comprehensive control of all production processes that are carried out in the production centre.

Warehouse with Movirack mobile racks
The second construction built by Mecalux for Granada La Palma is a warehouse dedicated to consumables and packaging. It has its own unloading docks and connects directly to the production plant through a main aisle and an access door.

It involves a high-density storage system that maximises available surface, by multiplying the number of pallets that can be housed in the warehouse. The racks are placed on mobile bases, which move sideways, eliminating and opening working aisles when necessary.

How Moviracks work is very simple, the operator gives the automatic open order to the selected base using a remote control. Then, direct access to the SKUs in the corresponding aisle appears and goods can be extracted or placed with a reach truck.

The system is fitted and protected with safety devices to protect people, and the goods stored. They installed external barriers that stop movement if a person enters the aisle, and internal barriers that detect the presence of objects inside that would prevent racks from shifting correctly.