A large picking installation with conveyors to manage the online sales of 10,000 pairs of shoes a day

Spartoo, European leader in selling shoes online, has built a new 23,000 m2 warehouse in Saint-Quentin-Fallavier (near Lyon) capable of storing 2,200,000 pairs of shoes, streamlining all processes related to the preparation of orders and issuing more than three million pairs of shoes per year. 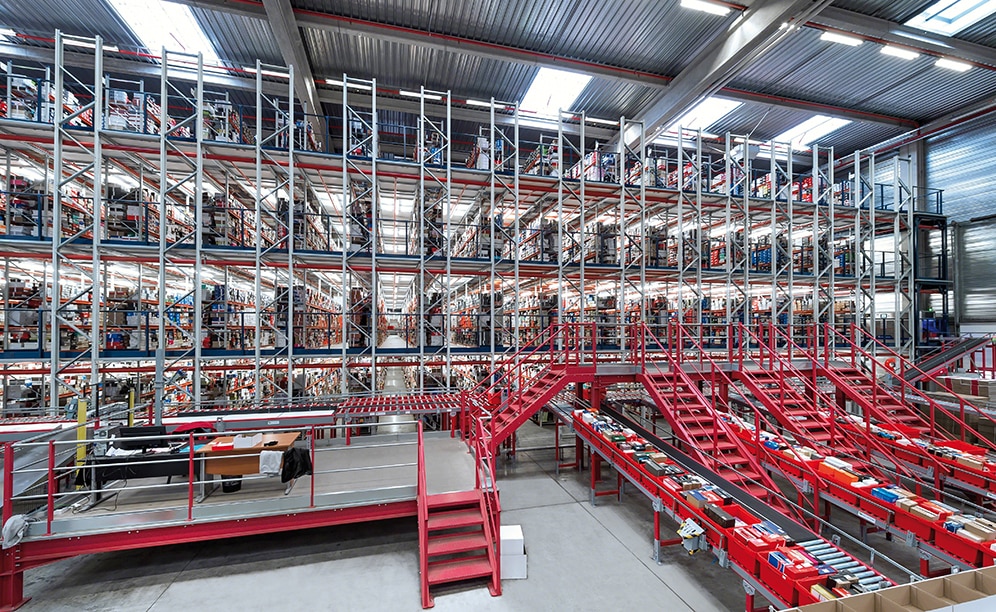 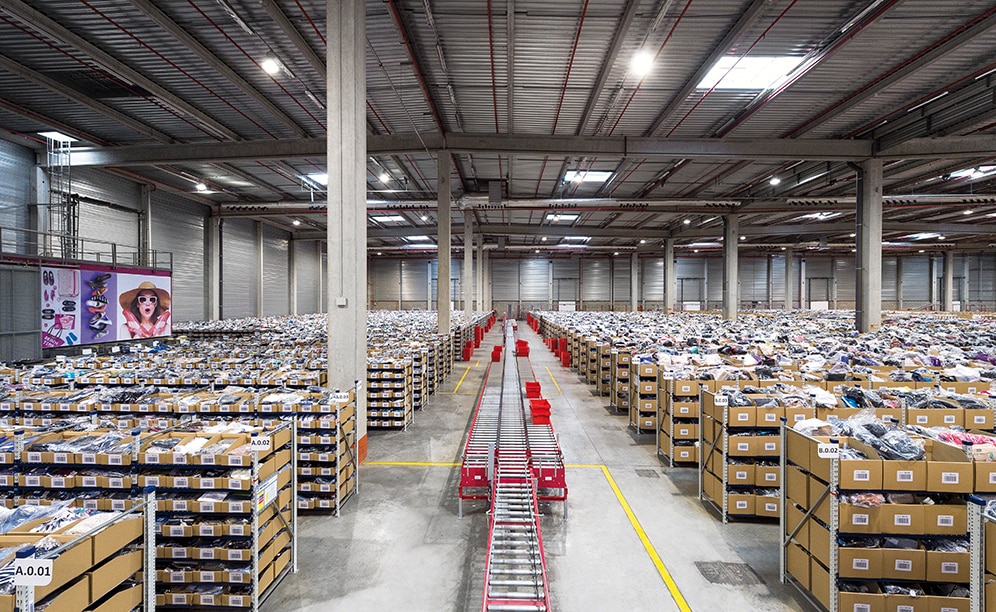 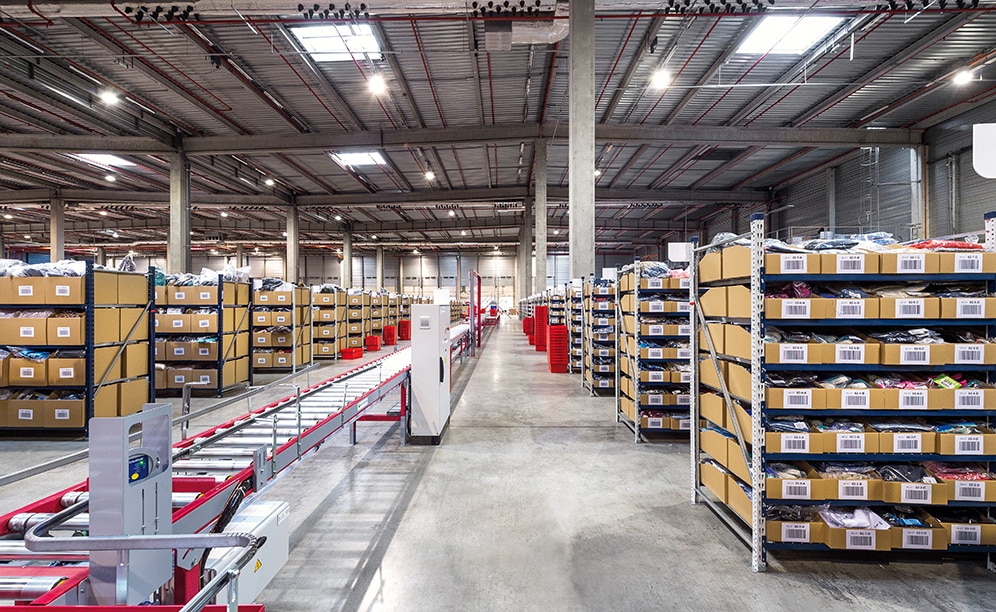 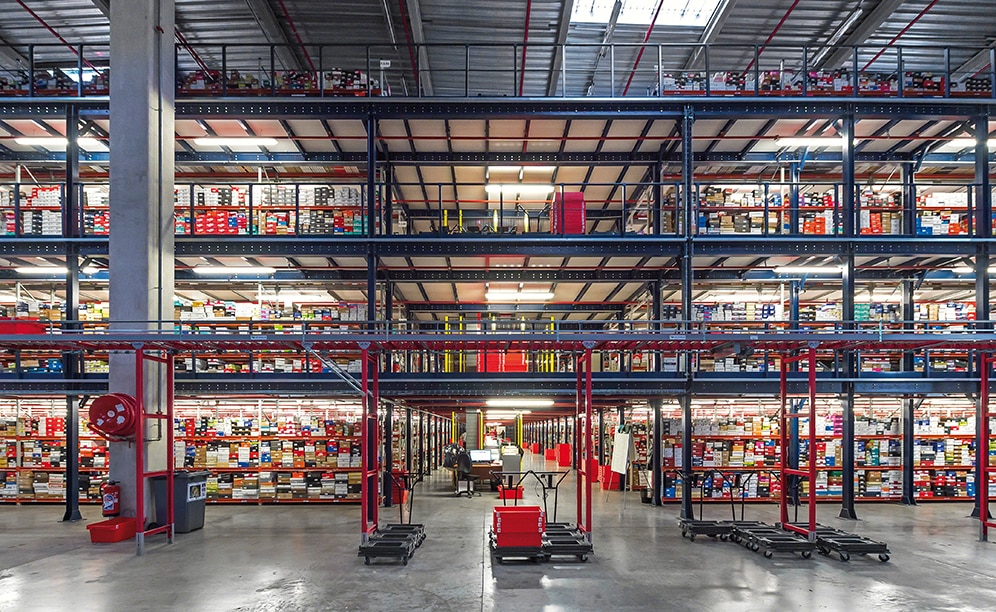 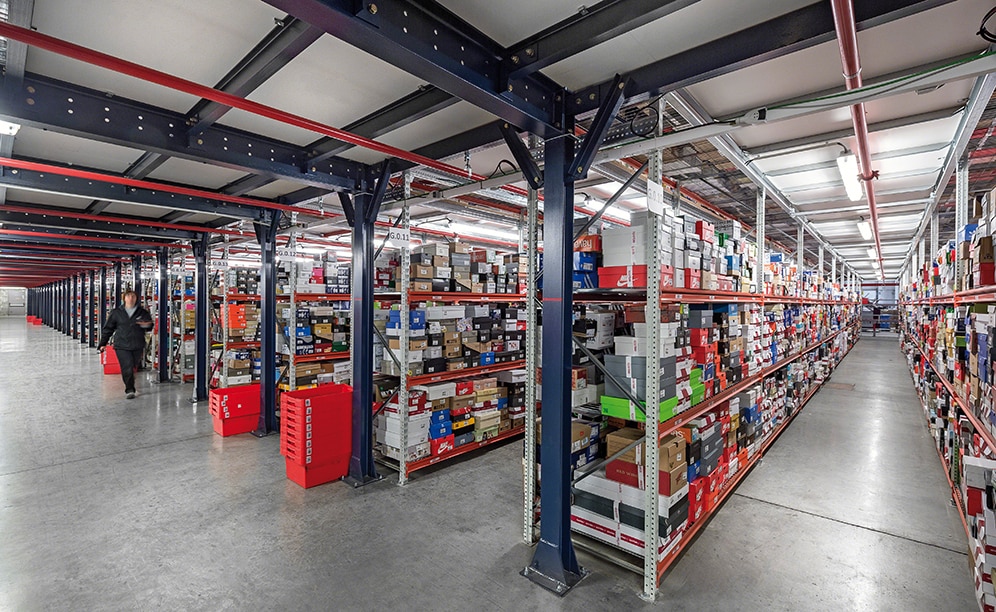 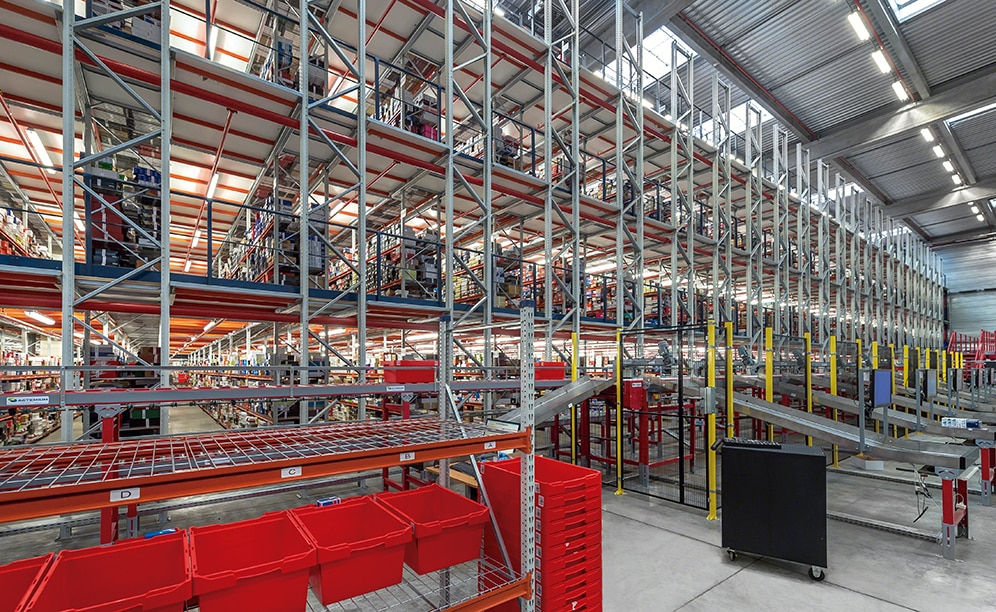 Spartoo was established in 2006 when three friends in the French city of Grenoble opened their own web for selling shoes online. What began as an adventure among friends, after a decade of work and dedication has become one of the top European e-commerce platforms in shoe sales.

Currently, Spartoo invoices 140 million euros annually and is differentiated by offering its customers a selection of more than 1,500 trademarks that represent 100,000 different SKUs.

In recent years, the company has diversified its business by incorporating fashion accessories and clothing into their product selection. The company is present in more than 20 countries, including France, Germany, England, Italy and Spain.

The solution: at first glance

Spartoo, which has more than one million pairs of shoes in stock spread over many SKUs but with few pairs each, required a warehouse that offered a high storage capacity, direct access to any product and an agile order preparation system. In addition, the warehouse should be prepared for the future growth of the company.

Under these prerequisites, the 23,000 m2 surface has been divided into two premises connected by a large enclosed conveyor circuit.

The main difference between the installations is that the second has a mezzanine with racks for picking. It is divided into three levels above the ground floor, quadrupling the useful storage area. On the other hand, premise 1 only operates on the ground level.

The conveyor circuit not only joins both areas, but also serves to streamline processes related to the preparation and sorting of orders.

The circuit runs through the two premises, connects the four levels of the mezzanine floor, crosses through the prep stations of premise 2 and ends in the order consolidation, sorting and dispatch area.

Premise 1
Currently, this area occupies more than half the Spartoo warehouse and contains a storage capacity for more than 145,000 boxes for shoes, folded clothing, bags and accessories. A mezzanine floor in the process of being installed will store 1,200,000 items (textiles and shoes).

The shoes are deposited on three levelled bays, each 2.5 m long. Meanwhile, textiles and accessories are stored in four and seven levelled bays.

Each level of the previously mentioned bays is 1.25 m long and can withstand a maximum of 65 kg each.

The conveyor circuit crosses the racking to reach the opposite end, where it runs along the wall of the warehouse until it connects with premise 2. They have set up five stations, all along the trajectory, so that operators carry out the preparation of orders.

Premise 2
This area, slightly smaller than the previous one, features the spectacular three level high mezzanine floor, plus the ground floor. Thereby, the useful work surface area has quadrupled.

This way, the height was made full use of to maximise the space available and to gain greater storage capacity.

{0Each floor is equipped with racks of different dimensions and distributions to suit the variety of products stored, in order to obtain a capacity for more than 800,000 pairs of shoes.

The conveyor circuit passes through the central area of each floor, with racks set up on both sides. The diffusion of goods between floors is performed via vertical lifts at the ends of the circuit.

There are stairs between floors, enabling access and rapid evacuation for operators during possible emergencies.

Preparation of orders: process and features
After an in-depth analysis of both the needs of the company and the physical characteristics of the warehouse, a zoned picking method based on the person to product criterion was chosen. It was selected being that the operator moves to the locations where the required items are stored to fill out orders.

The Spartoo warehouse consists of multiple zones or stations where one or more operators carry out picking on order prep tables with rollers. Operators follow the order grouping system, which enables the optimum numbers of trips, since with a single trajectory they can prepare all the items of several orders. At the same time, the margin of error is reduced. Orders are consolidated and sorted before being sent, and once the entire picking process has already been carried out.

After completing the order assigned to a particular area, the operator places the box on the main circuit conveyor to send it to the next picking station or, if the order is already completed, to the sorting area.

Replenishment
Spartoo has a policy that all orders placed before 15 h depart that day. Therefore, they take advantage of off-peak hours to replenish in the morning, when there is less order preparation volume.

Sorting, consolidation and dispatch area
The company has a huge area adjacent to premise 2, where consolidation, sorting and forwarding of the goods are performed. Operators have packing boxes of different sizes, prep tables, computers and printers to complete the process.

Boxes with grouped orders arrive to consolidation stations via the conveyor circuit. Operators separate the items and introduce them into the box used for shipping. When the order is finalised, it is packaged and both the packing list and shipping labels are created. It is then moved to the preloads area, where it is sorted by delivery routes.

Fire protection system
There are smoke detectors and control devices that act directly above the affected area if needed. The automatic fire sprinklers are strategically distributed inside the racks based on the fire load, that is to say, according to the fire risk the different areas of the installation represent.

In addition, the racks are fitted with metal mesh for the passage of water, while some areas have slotted metal flooring installed to serve as a smoke evacuation system.

Spartoo has built a huge picking installation with conveyors to handle 10,000 orders per day

The premise 1 contains a storage capacity for more than 145,000 boxes for shoes, folded clothing, bags and accessories