Live picking racks are the highlight of the new Apymsa warehouse, a leading Mexican company in the sale of automotive parts

Apymsa, dedicated to the distribution of spare parts for automobiles, has a large warehouse intended primarily for picking operations in the city of Guadalajara (Mexico). The installation supplied by Mecalux is composed of two high-rise picking blocks that include a conveyor circuit, pallet racking and sorter for classification. 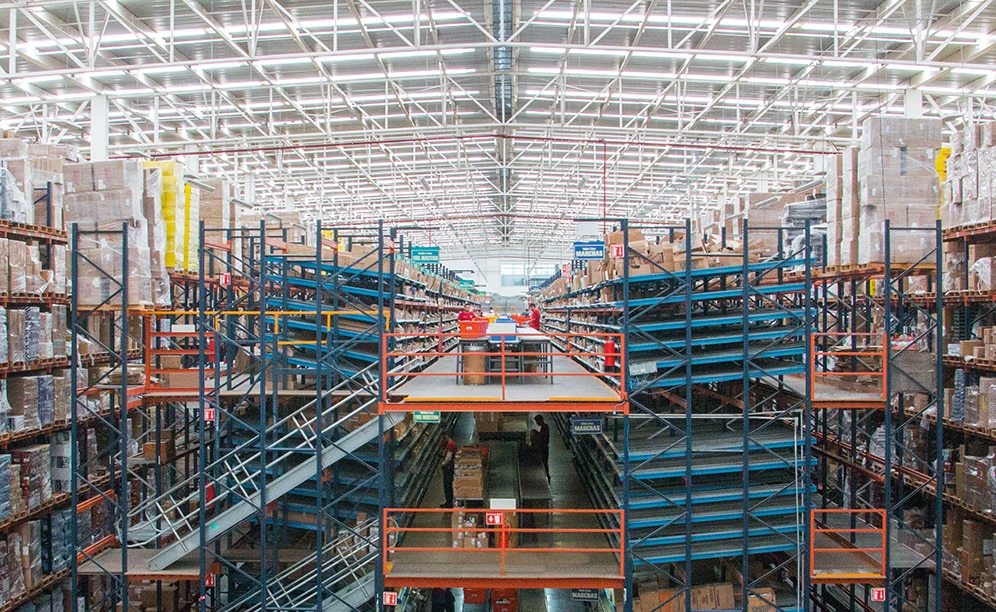 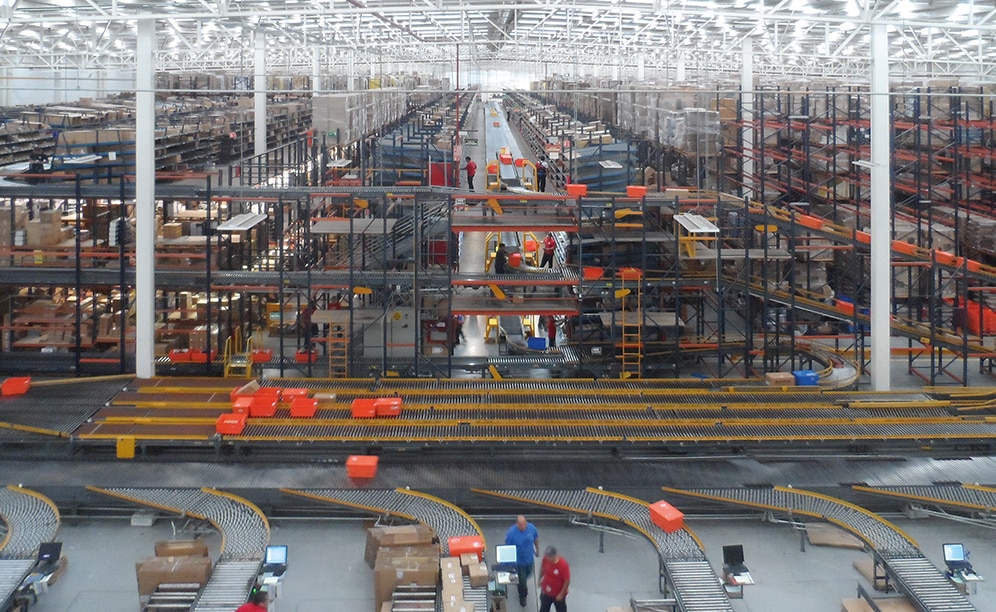 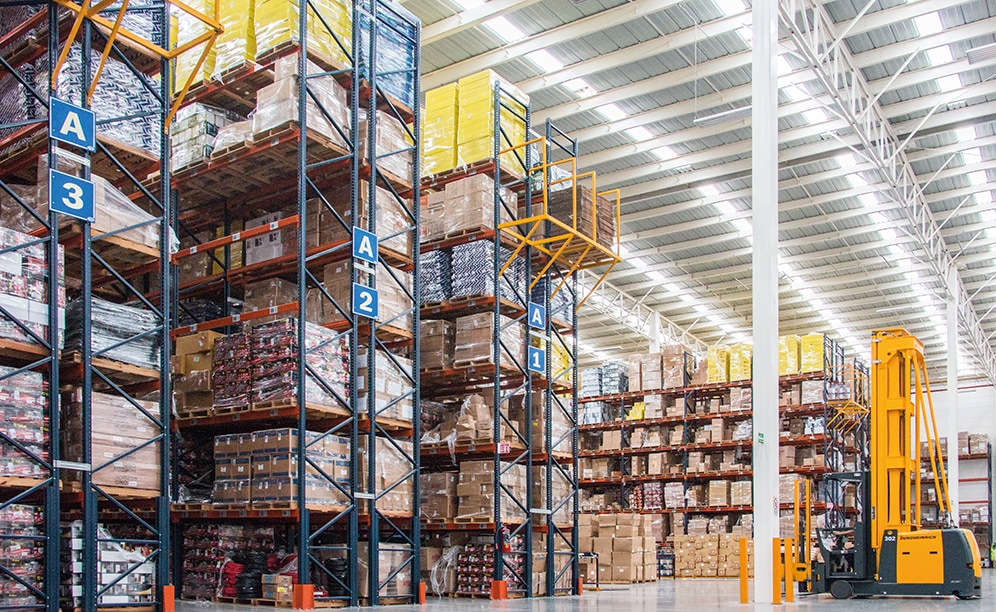 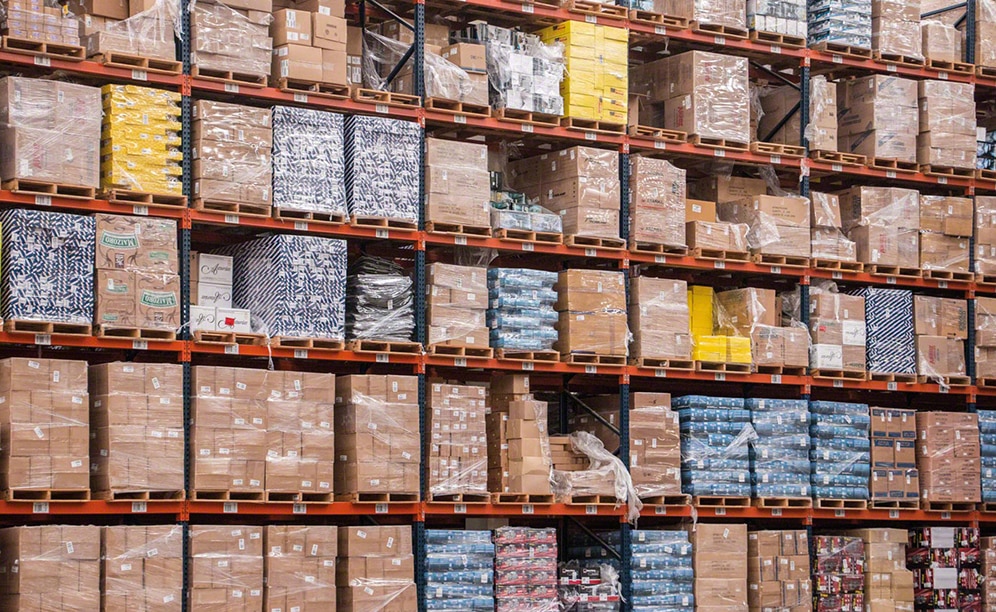 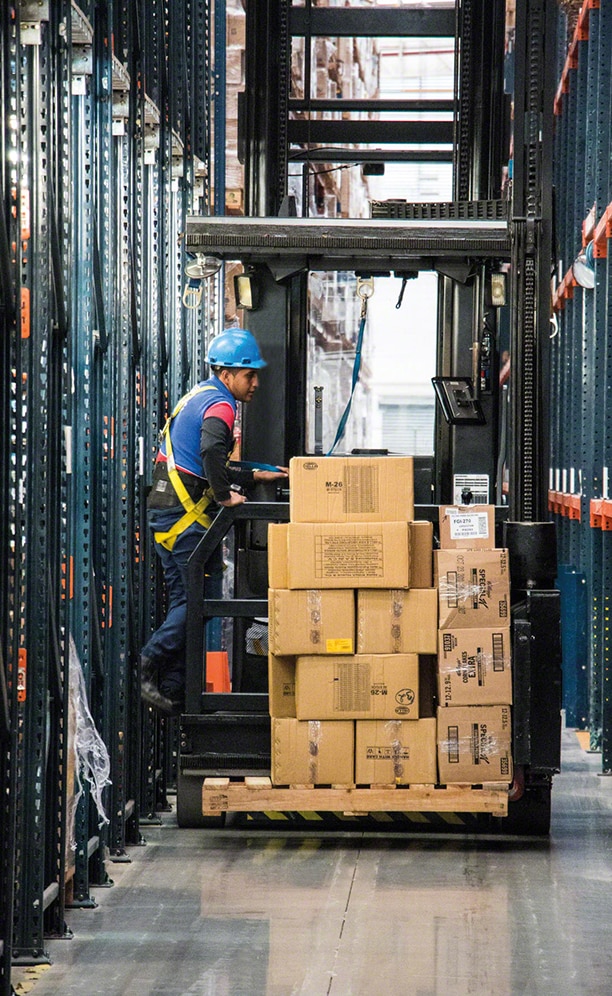 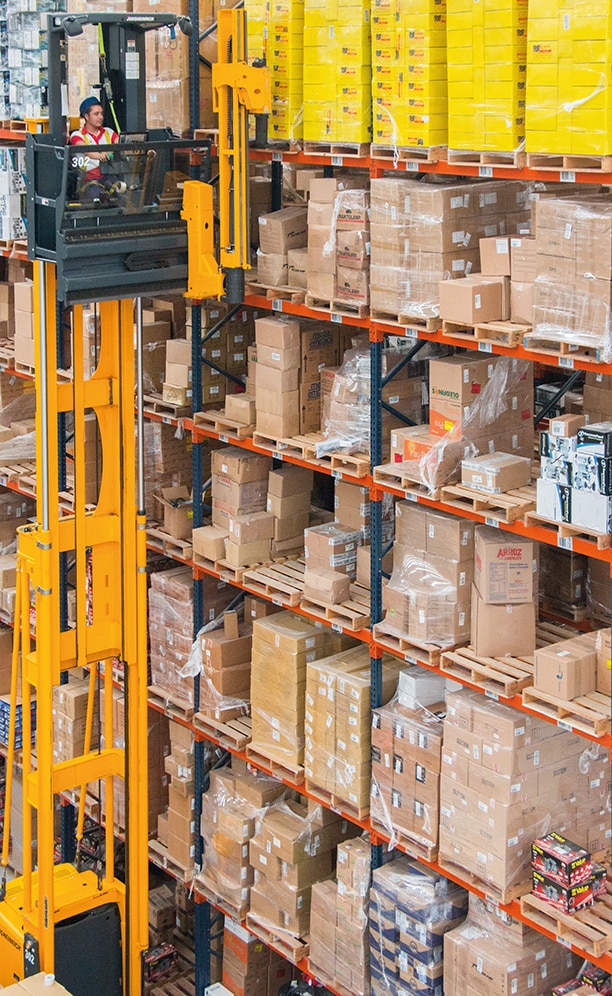 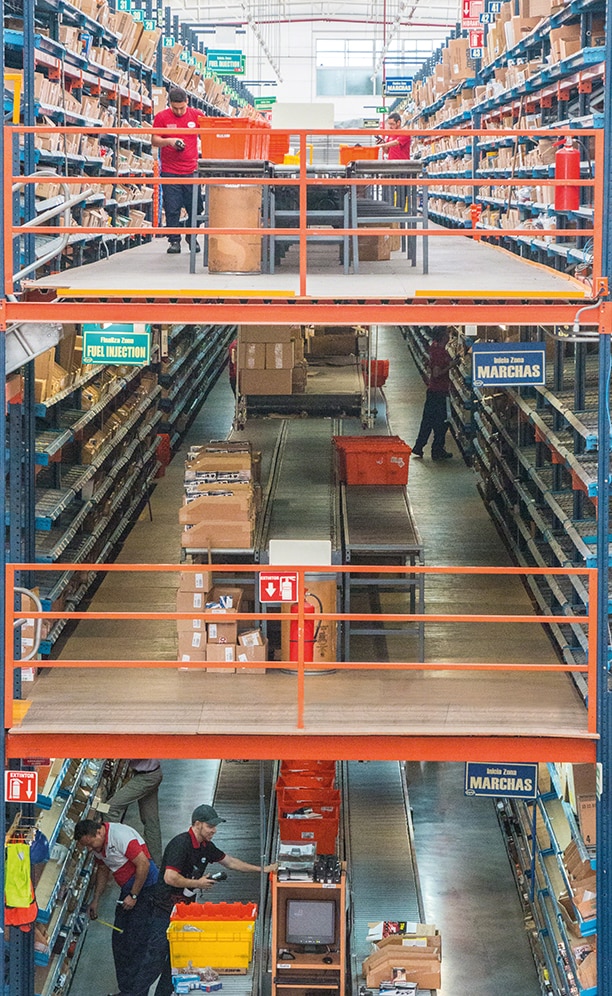 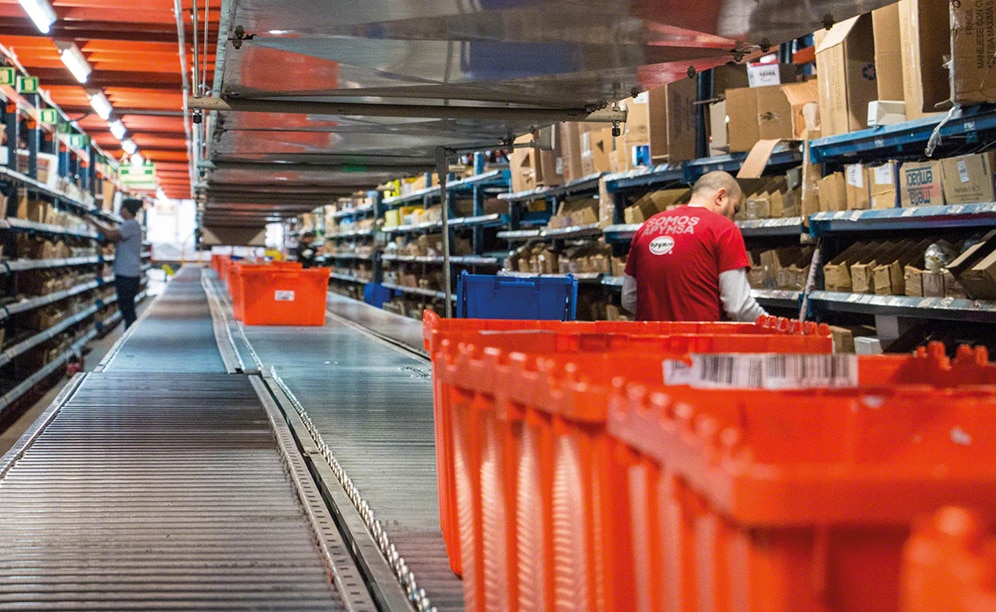 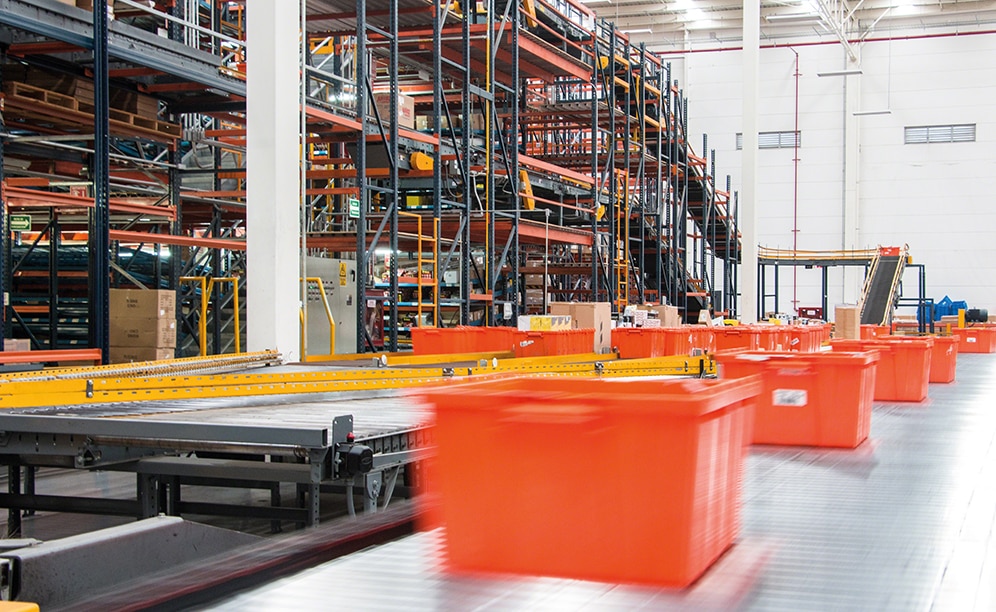 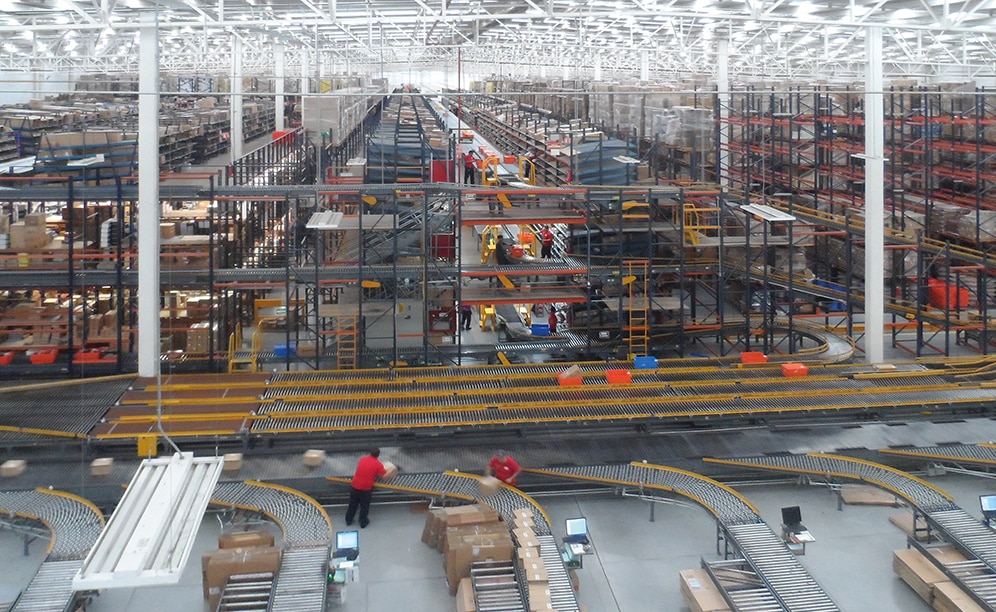 Founded more than 37 years ago, Apymsa is the leading Mexican business in the sale of spare parts for cars and heavy-duty vehicles.

The company currently has 20,000 items and more than 83 branches spread across the country offering quality, customised service.

Mecalux solution: parts of the warehouse

After experiencing an unprecedented growth in recent years, Apymsa needed a warehouse to accommodate the large number of items it works with and, in turn, carry out picking in an agile and adept way.

After analysing the needs of the company, Mecalux supplied and installed a warehouse whose central core comprises two, three-storey picking blocks where order prep takes place, and which are supplemented by a classification sorter with eight chutes. In addition, the facility also has pallet racking on both sides of the warehouse.

Pallet racking
There are 500 pallet racks set up to store both reserve goods used for picking, as well as bulky items.

Located on both sides of the central picking block, the rack assembly offers a storage capacity of 10,000 pallets.

In addition, operators also perform picking directly from the pallets with the help of order preparation machines. Once they have finished picking, they move the SKUs to the front of the loading docks awaiting completion of the order with products from the high-rise picking blocks.

In the central area of the Apymsa warehouse is a huge 9 m high, 98 m long picking block, which occupies an area of approximately 225 m2. On one side a second, smaller picking block was set up:9 m high and 35 m long, with an area of 106 m2. These high-rise blocks are allocated to prepare orders one by one with high and medium turnover products (types A and B). They have three floors (the ground-level and two more) with a conveyor circuit that crosses through the central part of each of them.

On both sides and on each floor of the picking blocks, they have placed six levels of live pallet racking with rollers that allow optimal material input and output. The goods are introduced into one end and slide by gravity to the opposite side facing the picking aisle. The operators collect the products of the first box –the ones behind it contain the same SKUs and are used as reserves. To prep orders, operators work by assigned sectors and use a handheld terminal that reports the item that must be extracted, the amount and the corresponding order.

Subsequently, the operator complies the order on the rolling prep table and, with items from that area already inserted in the box, pushes it onto the main conveyor circuit to be directed to another area of the high-rise picking installation or, to consolidation stations if the order is completed.

Operators access the various floors via stairs placed at both ends of each picking block.

This picking system eliminates time spent on trips and improves both productivity and picking quality.

Classification of orders: the sorter
This area consists of four conveyor circuits; one of them carries out the recirculation tasks, redirecting boxes that have been rejected because of some sort of identification flaw.

The four circuits join before reaching the sorter, responsible for classifying the boxes from the two picking blocks. In all, the sorter has eight stations where operators separate the items and introduce them in the box used for subsequent dispatch. Each station has packing boxes of different sizes, prep tables, computers and printers to complete the operation.

Once the order is completed, the box is laid on the roller table that is directly behind, waiting to be transferred to the loading docks.